Later Pops was brought forth and Shel looked at him again, "he does indeed look like my brother but it's hard to tell."
"I think he looks kind of like Captain Jacques Sparrow," Commander Calgary said.
"But isn't Captain Sparrow a bird?" Shel asked stupidly.
"No, although he does strut about like one Captain Sparrow is all to human with all the frailties and sins of one." Captain Toronto replied.
"Ah," Leftenant Vancouver interjected; "but the legend has it that if he is away from his ship, the brigantine Singapore Sling, he will turn into a bird."
"Although that could explain why he seldom leaves it, stories about humans that turn into birds are not true." Captain Toronto said; "unlike true tales of speaking sailing cats." 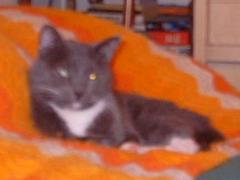 Perhaps it does have some 'magic' if it can enable that strutting, preening wannabe to be such a feared pirate, from what I hear most of his own crew hate him. He rules them through fear not respect. I would love to take that ship, the Singapore Sling as my own and with Pop's looking like her captain it might just be possible. If only we had a plan..."

Three weeks later they implemented Toronto's plan, Through contacts in the CIA (Cat Intelligence Agency) Captain Toronto had discovered that the Singapore Sling was sailing in the South China sea. 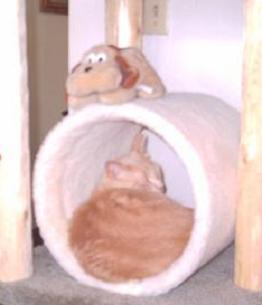 Guarded by Lup the Pup Commander Calgary rests before the mission
Shel's brother Pops had been well briefed in how Captain Jacques Sparrow behaved. In the dead of night, dressed as Captain Sparrow, Pops was lowered into a small rubber dinghy; then Commander Calgary climbed aboard. The dinghy ran almost silently with a bosun from the CatAvenger working the small electric motor.
The dinghy pulled up beside the Singapore Sling. Oinkly the pig and Paco the lizard were waiting.
The Singapore Sling suffered from chronic desertion and was in need of crew members. Oinkly and Paco had let themselves appear to be shanghaied five days previously.
The crew member on guard watch had been drinking on duty and had passed out from the opiate Paco had slipped into his hooch. The duo pulled pops on board and tied the dinghy alongside. They went quickly to the captain's cabin. Since Jacques Sparrow was paranoid it was of course locked however Oinkly was able jimmy the locks open fairly quickly with the picks Calgary handed him. Once inside however the lights came on and they stared into the barrels of a huge howdah pistol wielded by Captain Jacque Sparrow. "Poof" a dart shot out of Calgary's air pistol. It hit Sparrow and he keeled over frozen instantly by the paralyzing action of the dart's poison.
Calgary with the help of the others dragged Jacques to the dinghy and tossed him in. "You know what to do now," Calgary said. "You help Pops and by the time the crew realize he is an impostor they will have accepted him. They are bound to like him better than the old captain." With that Calgary scrambled into the dingy and took off in to the night.
The watchman soon woke up and threw away the moonshine over the side of the ship to guilty to admit he had been passed out on duty. With the help of Paco and Oinkly, Pops took his place as captain of the ship.

When they hauled Jacques onto the deck of the Catavenger they soon discovered that the dart's narcotic had worn off. He lept up and grabbed a boathook charging Captain Toronto with it. Toronto ducked under the boat hook and tripped Sparrow who went sprawling on the deck. The Catavenger's captain marched him to the brig at sword point.

Captain Toronto was now the proud possessor of two ships. "I suppose this makes you an admiral or something now." Commander Calgary said. "Actually I prefer the older rank of commodore." Toronto replied. 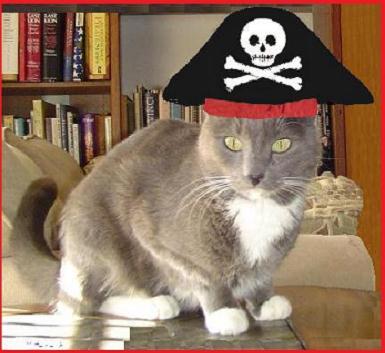 As they slowly sailled to Shelcat Cay after several days went by the Catavenger crew noticed changes in Jacques the rumors were true he was slowly changing into a bird. He was indeed a sparrow. One day Shel looked into the Brig and noticed that the bird was missing. Panicking Shel ran to find Commodore Toronto. After hearing Shel, Toronto told him not to worry that the bars on the brig were not designed to hold a creature as small as a bird inside. However it no longer mattered as the sparrow without it's ship was nothing and the Singapore Sling was now thousands of leagues away. As Shel walked off satisfied with the explanation Commodore Toronto grinned his cheshire cat grin and went back to picking feathers out of his teeth.

About the ending, it is perhaps not for the squeamish, of course maybe the little birdy did escape and those were only feathers from the old cushion that Toronto liked to sleep on. But then again cat's will be cats.

Hopefully the Singapore Sling with Shel's brother Pops will not vanish over the edge of the world and Toronto
will continue as commodore.