"Don't eat them yet, I will cook them up in a nice gravy!" Tiberius the cook scolded the mythological dog. They did nothing of the kind though but rounded up the Trolls ( including my cushion) and locked them in the the same cage the Atlanteans had been held in. We looked around in vain but saw no sign of Topcat. 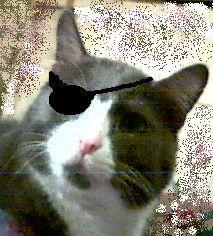 While the rest of the crew had gone after the main body of Trolls only Topcat had seen the leader slip away down a narrow side passage. He gave chase after the Troll who ran on until he skidded to a halt at the brink of a great chasm. Far below volcanic activity gave off an eerie light. Topcat's one big green eye widened as it adjusted to the dimness. "Hey I recognize you! You are the same so called elf who bit Spooky and poisoned her!" Topcat shouted and charged the Troll sword in paw.
The evil troll laughed as he pulled an old German Luger and fired.
Topcat deflected the shot with his sword but it was wrenched away by the impact. Topcat pulled his own mini Uzi pistol and shot the Luger from the Troll's grasp.
"Lets settle this hand to claw!" Our Captain said as he threw down the weapon and hurdled himself at the Troll raking him with his sharp feline claws. From somewhere the evil one produced a derringer which he pointed at Topcat. The hero cat violently shook his head, this dislodged his eye patch revealing a great glowing green emerald. A piercing light beamed from the jewel blasting the Troll over the precipice. Down, down he went shrieking as he fell into the fiery pit below, and then all was silent.
The crew of the Catavenger took a vote on what to do with the Trolls. The majority voted to eat them there was one vote (mine) to use them as cushions. The Atlanteans however overruled us and decided to just imprison them for life (spoil sports.)
The city of Atlantis held a dinner in Topcat's honor and presented him a medal for valor. However he was offered no kind of monetary reward. Topcat asked for nothing except for one of the submersible bubbles so that he could come to the aid of the city if it ever was in trouble again.
It was soon time to sail after the bubble took the ship to the surface; ( Topcat had been shown its operation and how to deflate it and fold it into a surprisingly small package that could be easily stowed.)
After the magical fish had left Topcat and Panther relaxed on deck under the stars and enjoyed some (stolen) Atlantean pot sheen liberally laced with catnip.
As they sipped Panther pontificated; "I realize you will be able to put that bubble to some crooked use, however it seems like we did no get much out of the Atlantean cheapskates. We did after all go through a lot to save their sorry hides! Good thing I stole all the silverware from our farewell dinner."
Topcat replied: "Oh, Panther you have no imagination. I made a deal with those fishermen. Calamari is very expensive to buy, as soon as my share of proceeds is deposited to our Swiss bank account we will be rich again. Still it would be nice to know where Spooky hid those jewels..." From somewhere in the dark a mocking voice called out. "Who says you can't take it with you!" 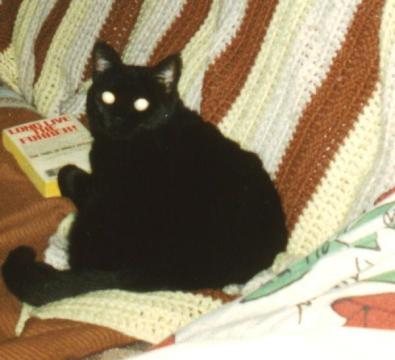 Epilogue:
While cleaning below decks of the ship I tripped over an old litter box. I had not even known it was there, naturally as the cats servant I had to clean it. Inside under the litter I found a lump. It was the bag of missing diamonds!

Moral of the story; clean your cat's litter box!

I Shel, the servant to the cats wrote this.

Writing this was very difficult without the help of that very literate cat, Spooky. She had served as my editor and helped in my writing, she is, (and will continue to be,) sorely missed.

"So he continues to miss me? Well it certainly shows in in his spelling and grammar. Hasn't he ever heard of a ghost writer?

Click the wheel to navigate to the next story:HIGH ADVENTURE

Click the ship to sail back to the start page: